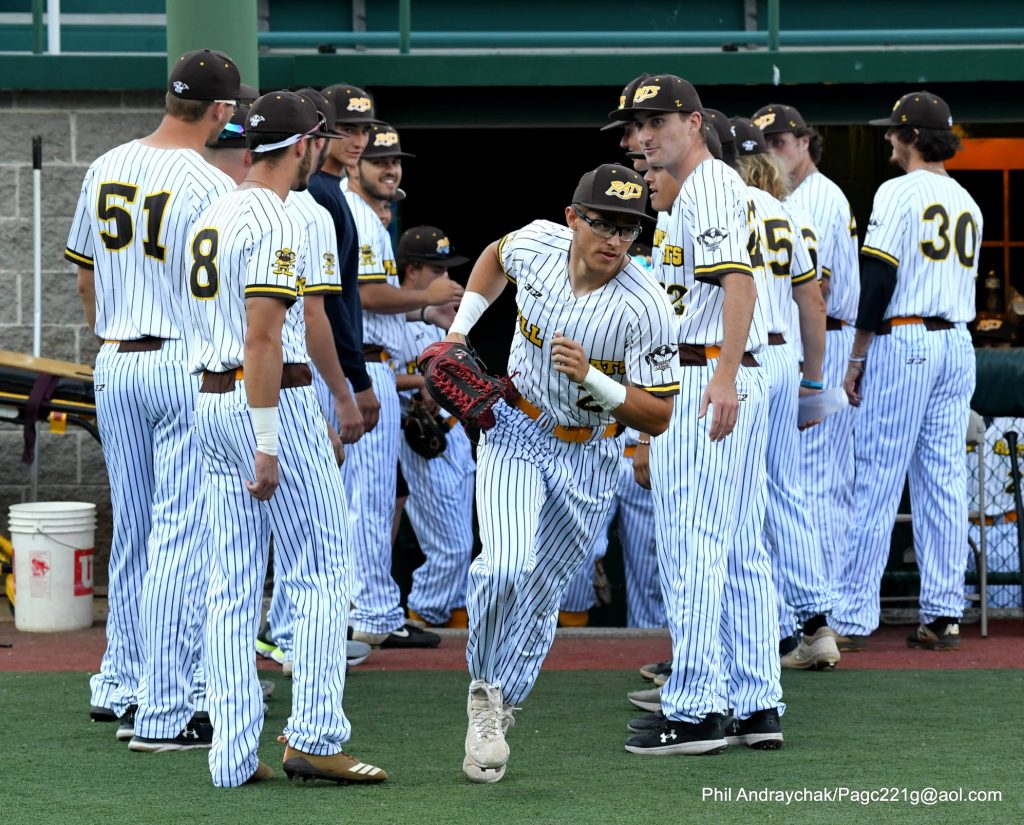 Mill Rats outfielder Ben Newbert has been a bright spot in the Mill Rats lineup this season and that continued when he stepped up to the plate to lead off the seventh and final inning in the game one of the double header on Sunday.

“We got our guy to the plate in the last inning,” Mill Rats hitting coach Greg Kocinski said.

Newbert was anticipating a big moment at the plate in the seventh inning.

“I told a couple of teammates that if I got up, I was going to swing as hard as I can if it was tied,” Newbert said.

In hindsight, it was correct on what Newbert told his teammates. His coaches would even agree with that.

That is to put it lightly. Newbert not only swung hard. He hit a walk-off home run to give the Johnstown Mill Rats (6-16) a 6-5 game one victory over the West Virginia Miners (12-9).

“[The walk-off] was pretty awesome,” Newbert said. “It felt good.”

The win felt pretty good for the Mill Rats as they entered Sunday on a six-game losing streak.

Newbert and the rest of the team snapped the streak in the first game of the day with a thrilling 6-5 win. Mill Rats hitting coach Greg Kocinski earned his first win in a manager type role as he was filling in for Mill Rats Manager Parker Lynn, who was serving a two-game suspension.

“It was my first managerial experience ever so it was really exciting,” Kocinski said. “Credit to the guys, I didn’t do anything special. They battled.”

Johnstown certainly had to battle to win the game after trailing 4-0 by the end of the second inning.

Mill Rats ace Dylan Brosky was the only Johnstown pitcher on the mound for game one. He calmed down to only give up one run for the rest of the game after a shaky first two innings.

The third inning is where the Mill Rats’ fortune started to change.

Tyler Dellerman drilled a two out and two-run RBI triple into right field to bring home Damien Yenzi and Ben Newbert. The triple cut the deficit to two. Then Nick Hess hit a double into left field to score Dellerman. Johnstown only trailed by one after the Hess double.

West Virginia would tack on one run in the fourth inning but it would be the last one of the game for the Miners.

Johnstown wouldn’t score until the sixth inning but they did just enough to tie it all up at 5. With bases loaded, Andre Good hit an RBI single to score Nick Hess. Then Cameron Walker popped up a sacrifice fly to bring in Pete Capobianco.

Game two of the doubleheader was essentially the same story. The teams were just flip flopped for the Miners 10-8 win over Johnstown.

This time, Johnstown had an 8-2 lead at the end of the second inning. However, the lead didn’t hold for the Mill Rats as the Miners chipped away at the lead and eventually took the lead in the seventh and final inning of the game.

The top hitting performances of the second game for Johnstown were home runs by Dellerman and Newbert, they both also tacked on three RBIs each. Nick Hess went 2/3 with a double and an RBI. Pete Capobianco hit 2/4 at the plate with an RBI as well.

Gabe Mallo picked up the loss for Johnstown as he gave up the go ahead runs but he did throw a solid 3 2/3 innings in relief. Myles Daniels grabs the win for West Virginia after he threw 4 innings without allowing a single hit.

“There is just a lot of heart,” Kocinski said. “The guys are playing hard. I know the record book doesn’t show it right now and they’re doing everything they can for us.”

Johnstown has tomorrow off but will travel to West Virginia to take on the Miners on Tuesday.