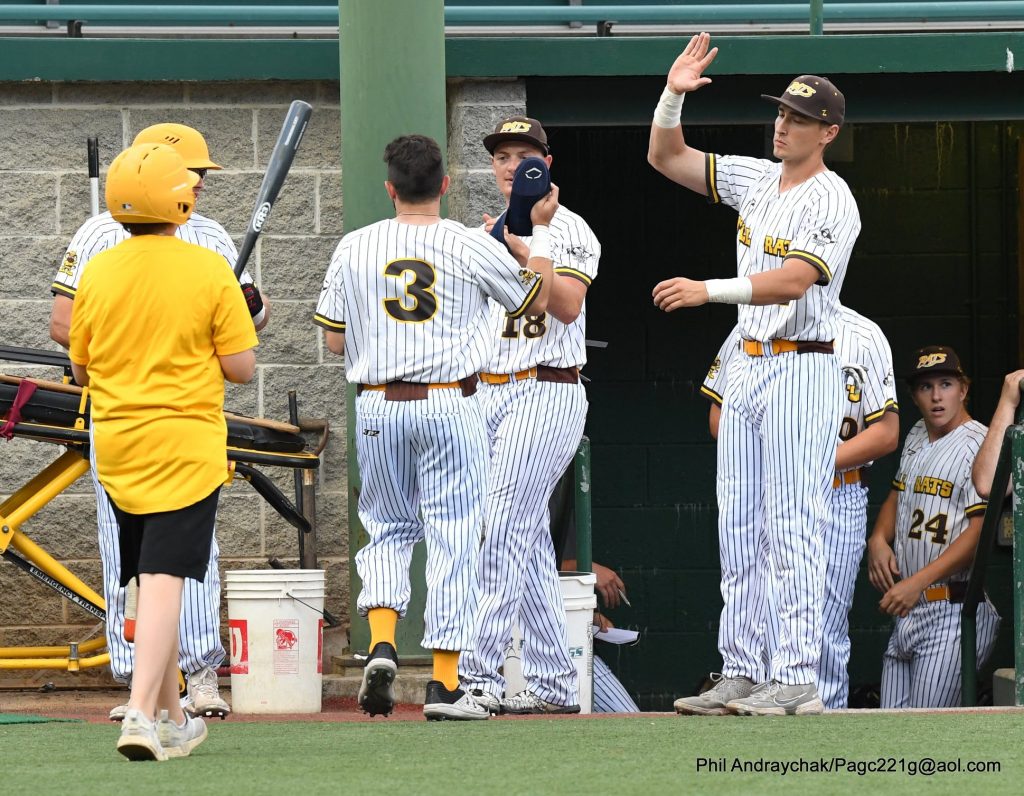 The Johnstown Mill Rats (7-19) had spectators hanging on the edge of their seats through the final few frames of their game against the West Virginia Miners (13-12).

Johnstown jumped out to a 4-0 lead to start the game and headed into the final inning with a 4-2 lead. The lead wasn’t safe as the Miners added four runs in the inning, which left everyone wondering if they were going to witness the same story unfold on a different night.

“[Giving up leads] is going to happen more than once and we just saw it happen on back-to-back nights,” Mill Rats Manager Parker Lynn said. “[The coaching staff] basically challenged the guys and said ‘it’s up to you, here it is again. Are we going to roll over or are we going to change it?’”

The Mill Rats entered the bottom of the ninth inning with the attitude that they wanted to change it.

Johnstown’s Ben Newbert has been a solid addition to the team and had a solid start to the inning for the Mill Rats with a single. Mill Rats Infielder Tyler Dellerman then reached on a walk. Johnstown’s Nick Hess drilled a single to left field to load the bases.

Two straight outs were recorded by West Virginia to dim the chances of a Johnstown comeback as the teams was trailing 6-4.

Sam Mast stepped up to the plate in midst of a not recording a hit in three-straight games and starting out 0 for 2 in tonight’s game.

“I’ve been struggling at the plate,” Mast said.

That was all in the past though.

“I just took the best swing that I could,” Mast said.

In arguably the most important at bat of the game, Mast’s best swing was more than enough. He smashed a deep double into that went over the head of Miners right fielder Juan Familia.

“[The hit] was just a sigh of relief,” Mast said. “[The hit] felt really good getting over [Familia’s] head.

Two runs scored off the huge hit from Mast and it tied everything up at 6 in Sargent’s Stadium.

“Sam’s been someone we can trust at the plate for big inning situations,” Lynn said. “For him to come clutch in that situation is only going to fuel his fire as we keep moving forward with him in the lineup.”

The game only needed one more batter to determine a winner.

Johnstown’s Jeremy Iellimo stepped up to the plate with runners at second and third. Iellimo watched the first two pitches come by for a called strike and a ball.

Iellimo was looking for his first career walk off winner.

He found it too. Iellimo drilled a single into left field to score Hess and to put the four-game losing streak to rest. The Mill Rats dugout enthusiastically stormed the field to greet the man who won them the game.

“[The walkoff] was crazy. I didn’t know what to think,” Iellimo said. “I just turned around and [my teammates] were just running and soaked me with a case of water. I just wanted to come through for the guys.”

Iellimo certainly ‘came through’ in one of the game’s biggest moments. Iellimo has played a tremendous role for the Mill Rats beyond what can be seen on the field.

“Jeremy is the glue that holds this team together,” Lynn said. “Jeremy started out as a temporary player for us and then the team’s morale kind of built around Jeremy and that’s when we offered him that full time spot. That was a really big moment for him and I’m happy for him.”

Johnstown’s starting pitcher Dylan Brosky set the tone for the team’s 7-6 win. Brosky threw for 6 2/3 innings and had to get pulled due to the leagues pitch limit. Brosky didn’t allow a single earned run come across the plate during his time on the hill and only gave up five hits.

“He’s been consistent all year and he’s been nothing but lights out,” Lynn said. “He has a mound presence like none other that instills confidence in our defense and our hitters. I think we saw that tonight.

Johnstown will hope to defeat West Virginia for the second Sunday in a row as the two teams will be playing tomorrow afternoon at 3 in Sargent’s Stadium.

Full box score of the game can be found here: https://baseball.pointstreak.com/boxscore.html?gameid=541040