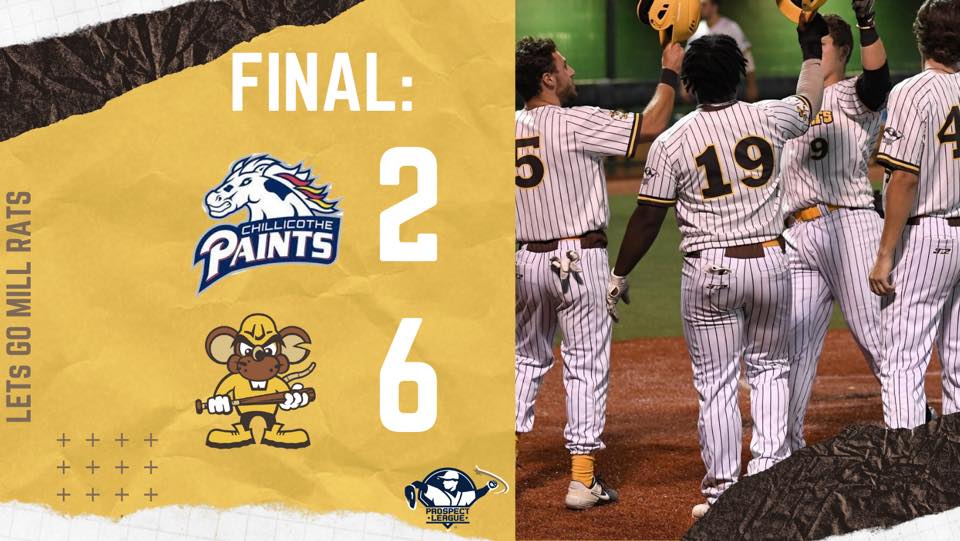 The Wednesday night matchup between the Johnstown Mill Rats [4-2 second half, 11-24 overall] and the Chillicothe Paints [3-3, 20-15] ended in six-innings due to weather. However, the weather couldn’t stop Johnstown from extending its winning streak to four wins in a row.

The Mill Rats picked up a 6-2 win through six innings. Johnstown now sits at the top of the Ohio River Valley division standings for the second half of the season after finishing last in the first half.

“It feels like everything is coming full circle for us,” Mill Rats Manager Parker Lynn said. “We worked hard in the first half. I know the record didn’t really dictate that but we figured a lot of things out about who we are as people and players.”

On the mound for Johnstown, Devin Lewis had an impressive Mill Rats debut. He threw for all six innings and only allowed two runs off of six hits and one walk.

“[Devin] was dominant. His mound presence was incredible,” Lynn said. “There’s not much more that you can ask for in a quality start from him.”

Lewis said he was “feeling his stuff early in the game,” but was quick to give credit to the offense. “The bats were really good tonight putting me in a good position to just go after batters.”

The inning began with a single by Ben Newbert and a double by Tyler Dellerman. Nick Hess hit a two-run triple to bring Newbert and Dellerman home.

Following the Hess triple, DJ Alexander reached on an error then Ryan McCarthy doubled off the left field wall to score Hess and Alexander. A few batters later, Christian Scott doubled to bring in McCarthy.

The final run of the second inning scored when Newbert singled for the second time in the inning. Newbert was the only Mill Rats hitter to have two hits in the game.

Johnstown is on the road against Chillicothe the next two days but will host the Paints on Saturday night at 7 in Sargent’s Stadium at the Point.

Full box score of the game is here: https://baseball.pointstreak.com/boxscore.html?gameid=541111