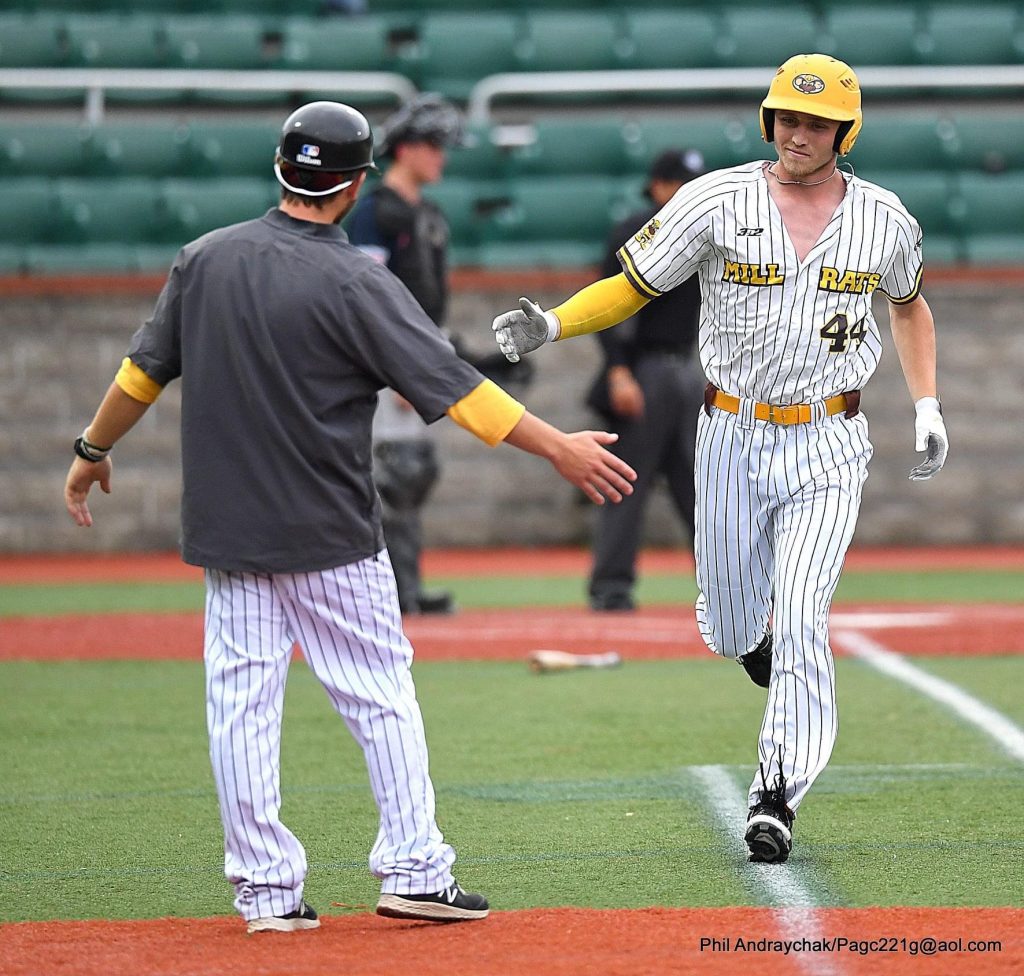 The Lafayette Aviators [11-2 second half record, 30-11 overall] flew into Sargent’s Stadium with a nine-game winning streak to face off against the Johnstown Mill Rats [7-4, 14-26].

Streaks are meant to be broken. Johnstown’s offense gunned down the Aviators winning streak with an 18-8 run-rule victory in 7 innings.

Ben Newbert was the one Johnstown hitter that certainly made an impact on the game. Newbert hit an RBI double in his first at bat. Then he followed that up with a two-run homer in the second inning. Newbert led the fourth inning off with a single to collect three hits early.

“When I hit my single and was [a triple] away, I was trying not think about [the cycle],” Newbert said.

Stepping into the right-handed batter’s box in the fifth inning, Newbert only needed a triple to complete the cycle. Facing a 2-2 count, he smashed a ball into right field that could have been enough for a triple.

“When I hit the ball in the air I was thinking [triple] all of the way,” Newbert said.

Newbert put his mental simulation into a game-time situation. He dashed his way to not only the triple but his, and the Johnstown Mill Rats franchise’s, first cycle ever.

Newbert finished the game going 4 for 5 at the dish with four RBIs. Newbert wasn’t the only sweet swinging Mill Rat in the 18-8 win.

Trey Lipscomb went 3 for 4 and knocked in four runs. Lipscomb’s college teammate Christian Scott was walked three times and hit by a pitch but had an RBI double in his only other at bat.

Tyler Dellerman batted 2 for 5 at the plate that included three RBIs.

Ryan McCarthy smashed a two-run homer in his only hit of the game.

Nick Hess slashed 2 for 4 and was also walked.

Johnstown’s offense collected 14 hits and only two Mill Rats in the lineup didn’t have a hit. The Mill Rats scored in every inning they batted in except the third.

Will Lozinak picked up the win for Johnstown on the mound. Lozinak threw for five innings and gave up eight earned runs, two of which were scored after he was removed from the game.

“We’ve got consistent starts from [Lozinak] all year and that’s what we look for,” Lynn said. “The underlying issue has been the back half bullpen and it seems we have that fixed now.”

The bullpen wasn’t an issue in this game. Benson Miller and Dylan Vega cruised on the mound in relief of Lozinak to put Johnstown’s two-game losing streak to rest.

Johnstown hosts Lafayette tomorrow at 7 pm for the second game of the homestand.

“We’re going to look to come out tomorrow with the same fire and energy,” Lynn said.