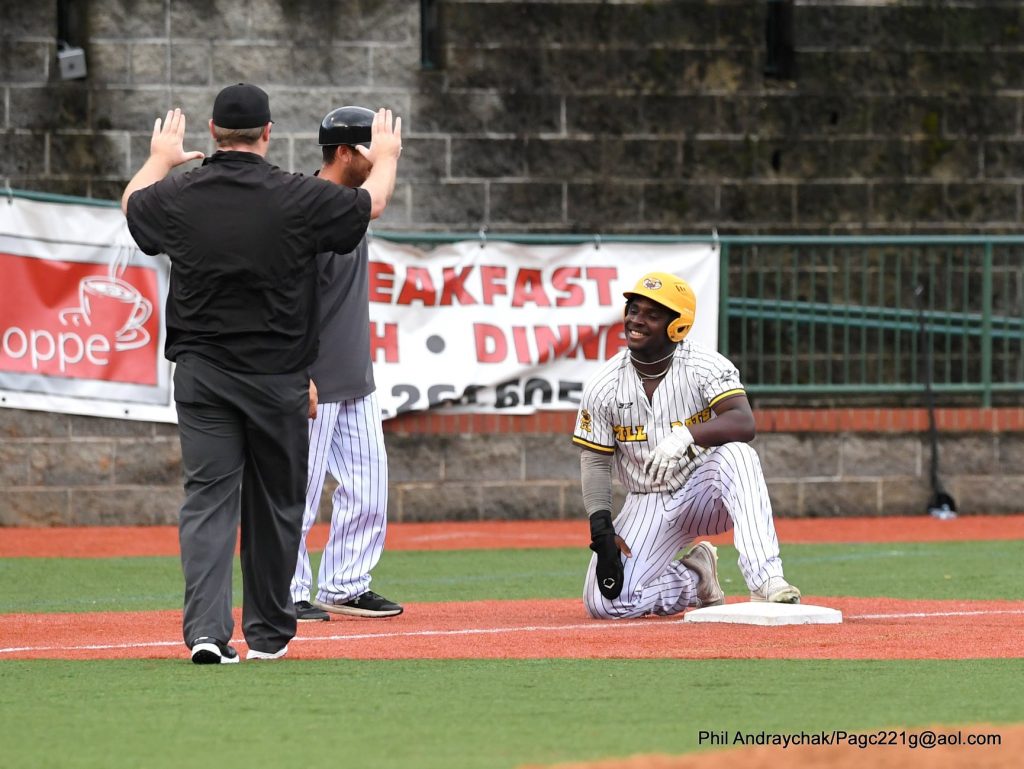 Slow start, strong finish could be the headline for a plethora of undertakings concerning the Johnstown Mill Rats [13-8 second half record, 20-30 overall]. The headline is fitting for the way the season started out but it certainly rings true for Johnstown’s 10-4 win against the West Virginia Miners [7-17, 22-30].

In the second inning, the Miners got out to a two-run lead off of Johnstown’s starting pitcher Kevin Schott. Schott only gave up one hit but five walks spelled the end of his day.

Sean Furlong replaced Schott and dominated on the hill for the Mill Rats.

“[Sean] has really proved himself early and often of what he is capable of doing,” Mill Rats Manager Parker Lynn said.

As for what Furlong was capable to do on the mound in the win, he pitched four shutout innings and West Virginia only had two hits off of him. While Furlong was proving himself on the mound, Johnstown scored its first run of the game in the third inning when Trey Lipscomb found himself caught in a run down and it bought enough time for Christian Scott to score.

Johnstown trailed 2-1 for majority of the game until the Mill Rats bats decided to rake in the sixth, seventh and eighth innings. The Mill Rats had nine runs, as well as hits, in those three innings combined.

“[The big innings] goes back to us being a resilient offense and that’s always how we’re going to be,” Lynn said.

The entire Mill Rats lineup contributed to the big offensive surge. Johnstown had a hit from all but two guys in the starting lineup. Those two players were still able help the offense with RBIs.

“That’s what we look for night in and night out, is for all nine of our guys to contribute,” Lynn said. “When that happens, what we saw tonight is the outcome.”

In the sixth inning, Nick Hess hit a ball that was misfielded Bradley Vargas and led to Trey Lipscomb scoring and for all runners to be safe on the play. Pete Capobianco hit a sacrifice fly to score Tanner Froelich and give Johnstown a one-run lead.

West Virginia scored two runs in the ensuing inning to go back up 4-3. However, the Mill Rats tacked on two more runs to regain the one run lead.

Johnstown exploded in the eighth inning, scoring five runs and reaching the 10-4 final score. Vargas made his second error of the game on an Iellimo hit, which scored Hess.

Alexander stepped up to the plate with Iellimo at second and Ryan McCarthy at third. In his last at bat as a Mill Rat, Alexander hit a bases clearing double to cushion Johnstown’s lead. Alexander had a standing ovation as Mike Whiteherse came to pinch run for him after the hit.

“I think that [final at bat] was a great way to go out,” Alexander said. “I’m going to miss [playing for the Mill Rats] a lot. Being around these guys really made this summer enjoyable.”

Scott followed up Alexander’s farewell with an RBI triple to score Whiteherse. Scott’s triple was one of his four hits in the game.

“Everyday I hit in the cages and trust my work. Today it finally paid off for me,” Scott said. “It’s a big deal for me having that confidence back and to see the ball well.”

Lipscomb would hit an RBI single to score his college teammate for the final run of the game.

With Chillicothe’s loss to Lafayette, Johnstown has moved back into first place for the second half of the season in the division. The Mill Rats host the Miners tomorrow night at 7 for the second of a four-game homestand.