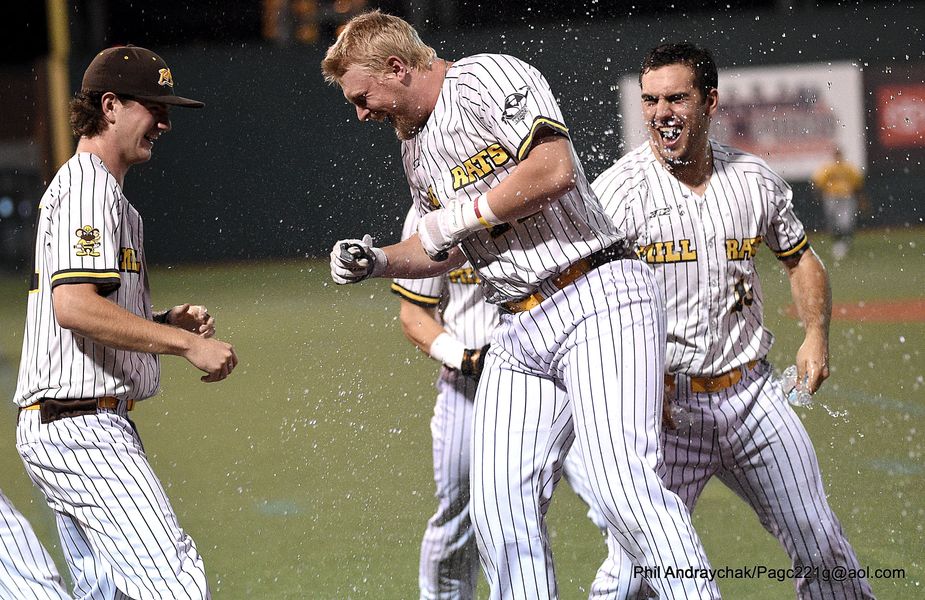 Johnstown string win behind performances from Wiltsey and Scott

The Johnstown Mill Rats [14-8 second half record, 21-30 overall] picked up their fourth straight win against the West Virginia Miners [7-18, 22-31] in the second of a four game homestand. In a nail-biting game, Tanner Froelich sent the Mill Rats home with a walk-off 4-3 victory.

Both offenses struggled early on, but the Mill Rats struck first in the third inning on a sacrifice fly by Froehlich to score Mike Whiteherse. Johnstown extended its lead to 2-0 in the fifth inning when Christian Scott scored on a double steal.

The Miners finally got a run across in the sixth inning, but left the bases loaded with the Mill Rats leading 2-1.

With that, Justin Wiltsey’s outing came to an end giving him six innings of work allowing just one run on six hits and two walks.

“What we’ve seen with him is consistency,” Mill Rats Manager Parker Lynn said. “He’s a bulldog, man, he’s a competitor.”

In the seventh inning, the Mill Rats took a 3-1 lead with a solo homer by Scott. Soon after, the lead was gone with a two-run home run in the eighth inning from West Virginia.

The teams entered the ninth inning still deadlocked at three each. Johnstown tasked Will Conroy with keeping the score tied, and he did just that.

With one out in the ninth, Scott recorded his third hit of the game with a single and quickly advanced to second on a wild pitch. The Miners intentionally walked Trey Lipscomb to put runners on first and second.

With still just one out, Tanner Froelich came to the plate in hopes of sending his fans and teammates home happy.

Following a pick-off attempt, both Scott and Lipscomb were caught in a potential inning-ending run down. Yet through all the chaos and scares along the way, both men finessed their way safely back to their bases.

“If it was any other two guys on base it would’ve been at least one maybe two outs, but those guys knew exactly what they were doing,” Lynn said in response to the run down.

A few pitches later a wild pitch put the winning run on third base.

Froehlich singled down the first base line and Scott scored his third run of the game to seal the victory.

“Every single guy worked their butt off today, I just felt like I had to go out there and do the same,” Froelich said.

The Mill Rats division lead is now extended to 1.5 games after Chillicothe lost to Lafayette once again. Johnstown plays its final two home games against West Virginia on Thursday and Friday with games starting at 7 pm.