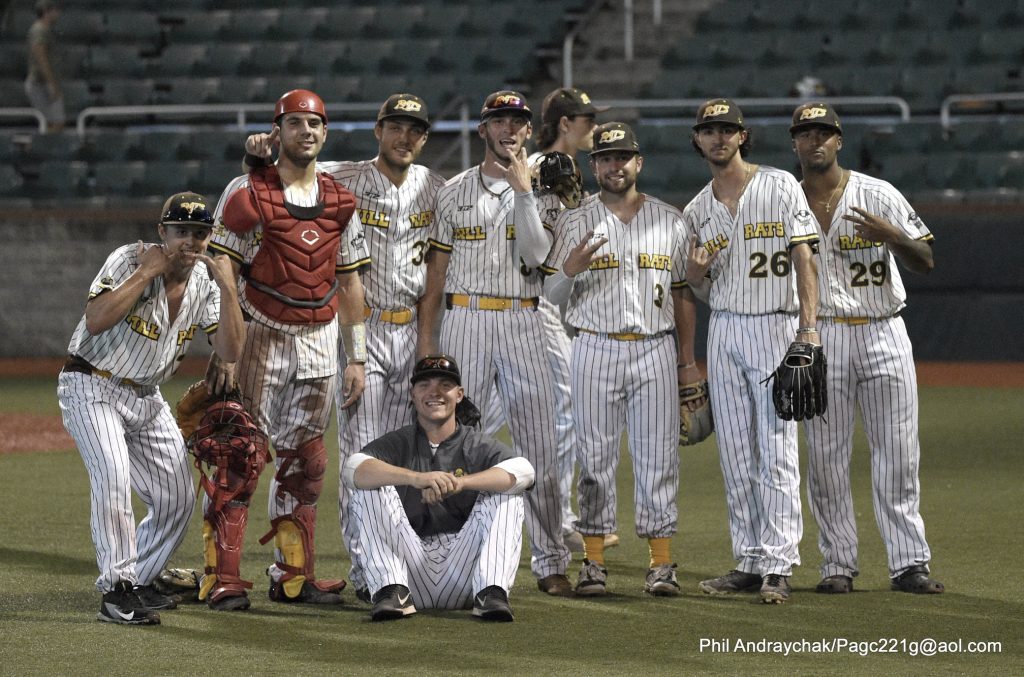 A night after the bats were nearly stagnant, the Thursday night matchup between the Johnstown Mill Rats [15-8 second half record, 22-30 overall] and the West Virginia Miners [7-19, 22-32] was a high scoring affair that saw Johnstown win 14-7. The Miners have now lost seven straight games while the Mill Rats have won five straight.

West Virginia got off to a quick start grabbing a 3-0 lead in the first inning. However, Casey Marshalwitz pitched limited the damage shut out West Virginia in the next two innings he pitched.

With two outs, Johnstown got its first run of the game in the third inning with a double from Tanner Froehlich to score Christian Scott.

The inning was highlighted by Nick Hess, Dylan Vega, and Joe Capobianco all hitting a single to lead off the inning.

Pete Capobianco stepped up to the plate with bases loaded and the third pitch he saw was driven over the left-centerfield wall for a grand slam. Johnstown took a 5-3 lead after Capobianco’s blast.

Later in the inning, Froehlich hit a two-run single and Ben Newbert scored Froehlich for the final run of the inning.

Mill Rats Manager Parker Lynn said, “That’s what a good offense does. Regardless who is throwing, they find ways to scratch and claw and find some barrels, and that’s what we did.”

Zach Rohaley came in relief for Marshalwitz and pitched six innings, allowing four runs. Rohaley ate up the innings for Johnstown from the fourth on and was credited with the win.

“That kid [Rohaley] is a grinder,” Lynn said. “He will eat any amount of innings we need him to and keep us in the ballgame.”

Despite all the positives from the game, the most exciting part to Lynn was Nick Roell.

Roell usually appears out of the bullpen for Johnstown, but tonight he was subbed into left field in the seventh inning. In the same inning, Roell made a diving play to record the second out. Then threw a Miner out at the plate to end the inning to boost the energetic crowd at Sargent’s Stadium. He also added an RBI in the eighth inning.

Lynn said, “It’s been an absolute pleasure” to play at Sargent’s Stadium at the Point this summer and wants to finish strong for fans in the Mill Rats final home game of the season on Friday against the Miners at 7 pm.