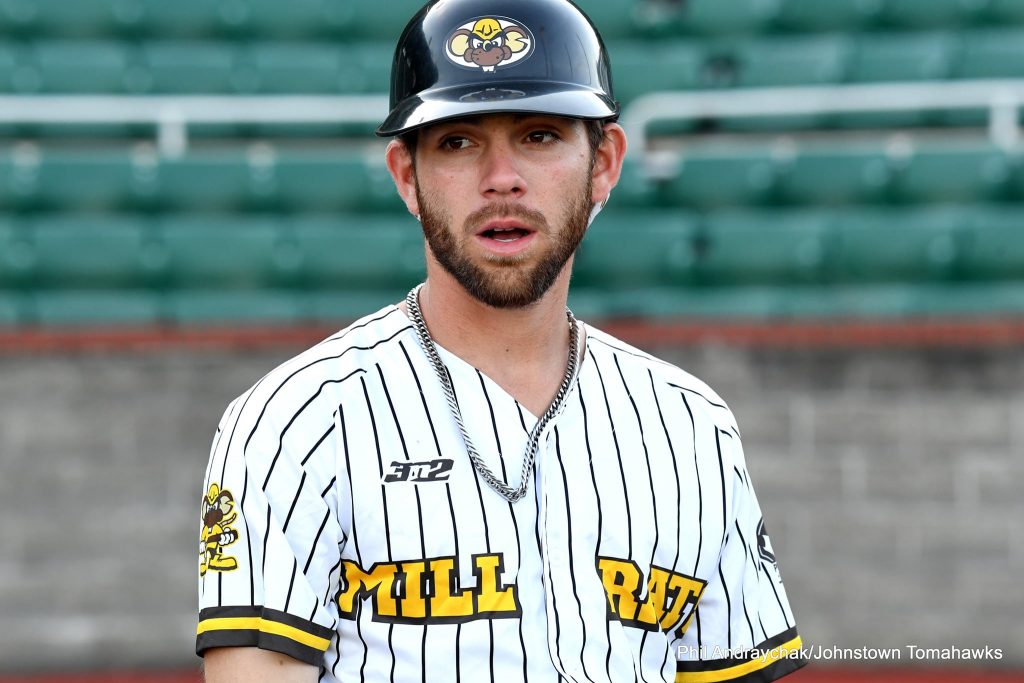 Mill Rats Coach Brayden Lackey has been chomping at the bits for Manager Parker Lynn to extend him a contract to play some games. Lackey finally got his opportunity in the unique Johnstown Mill Rats [16-8 second half record, 23-30 overall] 20-10 win over the West Virginia Miners [7-20, 22-33].

“I have been bugging [Lynn] all year for an at bat,” said Lackey, who just finished his collegiate playing days at Mount Aloysius. “It was really fun. It’s a really good time anytime you go out there and play the game you grew up playing as a kid.”

However, Lackey didn’t expect opportunity to strike for him on the mound.

“I didn’t think that if I was ever going to play that it would be out on the mound,” Lackey said. “We decided to save some arms tonight because we have a huge series against Chillicothe, in order to do that, I had to go out there and be an arm.”

Lackey finished on the mound throwing 3 2/3 innings and gave up only one run off of five hits. In a normal game Lackey probably wouldn’t have sniffed the rubber for Johnstown. However, this wasn’t a normal game.

Johnstown trailed 9-8 in the bottom of the fourth inning when the game became very puzzling. A conundrum was caused from the Mill Rats dugout in regards to the pitching eligibility of Miners pitcher Skyler Mays, who threw 34 pitches the day before and was required to have rest per league rules.

“I thought the right thing to do was address [the issue],” Lynn said. “Well, it turns out that the pitch count days rest rules are not a protest able offense, so we were handcuffed and forced to play the rest of the game. It was the league’s commissioner’s decision.”

A 20-minute phone call took place between Lynn, Miners Manager Tim Epling and the umpires to discuss and evaluate the situation. West Virginia was already short-staffed in the pitching staff leading into the series and have had many of its position players on the mound.

“It basically took 20 minutes for us to be told to continue to play the game, and then I went back into the locker room for another 45 minutes to be told again to continue to play the game,” Lynn said. “I don’t blame West Virginia at all, I respect the heck out of those guys. They’re coming down to the wire where they don’t have guys and there’s nothing, they can do about that.”

Johnstown and West Virginia essentially put on a batting practice show at Sargent’s Stadium, with 30 combined runs. The first inning lasted about 40 minutes and featured a combined 13 runs with Johnstown leading 8-5.

West Virginia scored one run in the next inning and then three in the fourth to go up 9-8 before the slight delay. Johnstown scored two runs to regain the lead in the fourth inning.

From that point on, the Mill Rats would stay up the rest of the game to finish their final home game with a run-rule win. Johnstown added four runs in the sixth, three in the seventh and three in the eighth to end the game an inning early.

Only two Mill Rats batters didn’t have a hit in the game. Dylan Vega led the offensive fire power for Johnstown going 2 for 2 with four RBIs, including an inside-the-park home run.

“It was fun. They had position players [pitching], I just had a Javy Báez leg kick and swung for the fences, and it worked,” Vega said.

In another notable event in the game, two sets of brothers played as AJ and Mike Whiteherse and Pete and Joe Capobianco suited up in Johnstown jerseys.

Since Chillicothe lost to Champion City, Johnstown extended its division lead to 2.5 games. The Mill Rats now have a six-game winning streak after the 20-10 win against the Miners. Johnstown has a critical series on Saturday and Sunday against Chillicothe this weekend.

“Anytime you play a team six times in a row is not going to be easy. Coming out with six wins in six straight [games] is huge,” Lynn said. “The next couple [games] are going to determine our season.”