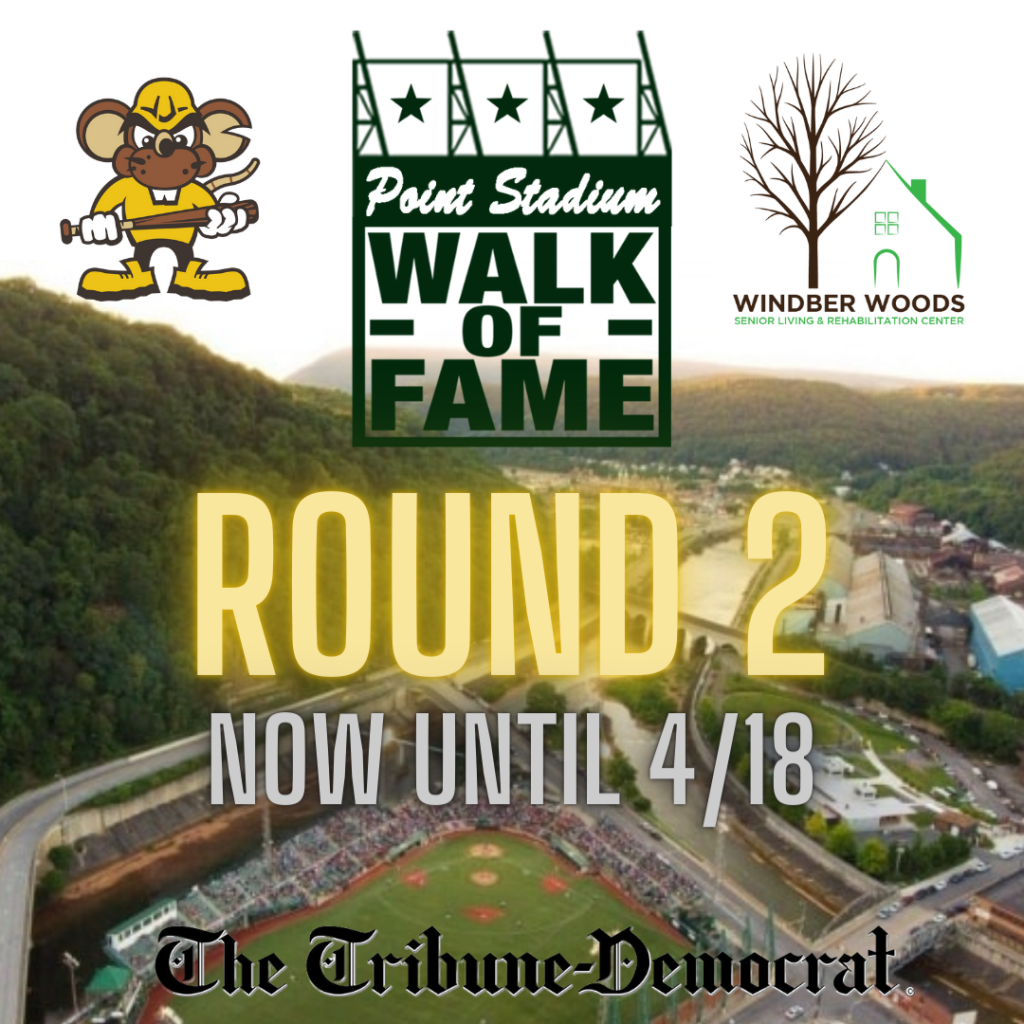 Fans have selected a diverse group of 10 finalists for the inaugural Point Stadium Walk of Fame.

Six will be selected for the honor through online voting, beginning Monday.

“Participation was strong in Round 1,” Kocinski said. “We were pleased with the nominations we received, and I think it really speaks to the history of this stadium and the pride the people of Johnstown have in it.

“We are really looking forward to inducting the inaugural class at the close of Round 2.”

The 10 finalists vying for six spots produced through the second round of fan voting from Monday through April 18 include, in alphabetical order:

The Greater Johnstown High School football, wrestling and baseball star who went on to star in football and wrestling at Michigan State University before coaching at the college level and serving as a NFL executive for a decade with the Philadelphia Eagles. Azar held the Johnstown Junior League home run record for 30 years, frequently blasting shots over the wall at the Point.

The rock star who played a concert at Point Stadium in 1989.

The Johnstown Catholic High star known as “Diesel” was part of a national championship football team at Notre Dame and played in the NFL with the Denver Broncos.

A Bishop McCort High School and Penn State University standout, won four Super Bowls with the Pittsburgh Steelers and earned a spot in the Pro Football Hall of Fame in Canton, Ohio, as one of the greatest linebackers to play in the NFL.

A star at Windber High School, who played at the Point against Johnstown High in some fierce rivalry games that drew thousands of fans. Kush played on great teams at Michigan State and was a legendary football coach at Arizona State University.

The Greater Johnstown High School quarterback nicknamed “Magic Man” for leading the Trojans to team success while also being named the Pennsylvania Big School Player of the Year.

A Greater Johnstown star in baseball and football, Pentz pitched the Johnstown Monte Carlo team to a rare win over New Orleans in the 1970 AAABA Tournament and went on to a major league career with the Houston Astros and Detroit Tigers.

The “Sultan of Swat” who played in an exhibition game with the 1927 New York Yankees Murderers Row team against the Johnstown Johnnies at the Point. For years, fans debated whether or not Ruth hit a home run in the game (he didn’t) won by the Johnnies.

A Greater Johnstown graduate who starred in football, basketball and track before a stellar career as a receiver at the University of Maryland, followed by a record-breaking, Grey Cup championship-winning, hall of fame career with the British Columbia Lions in the CFL.

The Conemaugh Valley High School graduate who stood out on the Johnstown Monte Carlo teams and was on four straight AAABA Tournament teams before advancing to the majors where he played 11 seasons and helped the Milwaukee Brewers reach the World Series during his Cy Young Award-winning season in 1982.